Back to Back to Black: A Tribute to Amy Winehouse feat Remember Jones 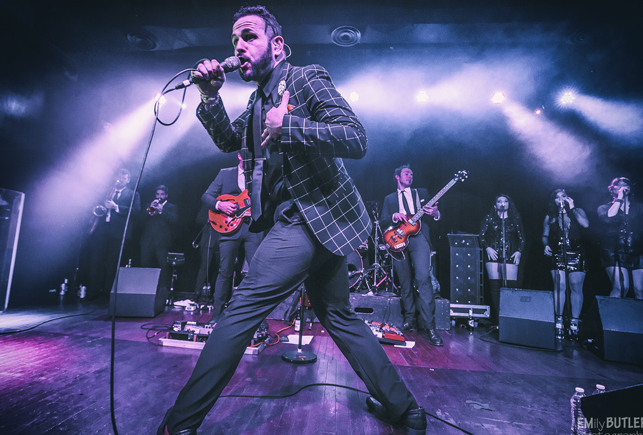 back to BACK TO BLACK: a tribute to Amy Winehouse and revival of the entire 2006 Grammy-award winning album BACK TO BLACK featuring Remember Jones with a 12-piece orchestra band + guests

plus an opening set of super-soul originals from Remember Jones!

Recently named one of Paste Magazine/Daytrotter’s Top Ten Soul/R&B artists of 2017, soul sensation Remember Jones brings a 12-piece orchestra to recreate the entire 2006 Grammy-award winning AMY WINEHOUSE album BACK TO BLACK, including a horn section, backing vocals, auxiliary instruments, and other special guests. Fronted by “one of the most enthusiastic, fiercely passionate powerhouses in the game” (Live for Live Music), Remember Jones will lead the ensemble through 17 songs, including the hit singles “Rehab,” “Tears Dry On Their Own,” “You Know I’m No Good,” “Love is a Losing Game,” and the title track, “Back to Black.” This one-of-a-kind show has sold-out most previous engagements.

The band includes musicians from some of the most acclaimed funk and soul bands in New York, Philadelphia, and Asbury Park’s music scenes. Remember Jones will play an opening set featuring material from his high energy, super-soul, original recordings!

Remember Jones is a one-of-a-kind soul/pop singer, storyteller and bandleader with a throwback vibe and authentic energy. Collaboratively supported by a large ensemble of
musicians (featuring female backing vocalists, a horn section, and a six-piece rhythmsection), the band has played to countless packed and sold-out ballrooms, clubs and
theaters throughout the country. As an original super-soul band, they have provided special guest opening sets for George Clinton & Parliament Funkadelic, Darlene Love, Ronnie Spector & The Ronettes, Southside Johnny & The Asbury Jukes, Ivan Neville’s Dumpstaphunk, Nigel Hall, The Hip Abduction, and more. And as a theatrical
entertainer, Remember has started in rock musicals, emceed large events, and orchestrated one of a kind experiences for all ages.

Remember Jones’ debut album, Ladies and Gentlemen, Remember Jones!, was created after raising close to $19,000 through nearly 300 small donations via
IndieGoGo, and created in front of a live studio audience with a 25-piece band. Their subsequent release, Tranquilizer!, was recorded at the Bomb Shelter in Nashville, TN,
under the production of Andrija Tokic (Alabama Shakes, Hurray For the Riff Raff, Langhorne Slim). Remember Jones was named one of Paste Magazine and
Daytrotter’s Top 10 R&B/Soul Artists of 2017.

In addition to touring and supporting two albums worth of original material, Remember Jones presents and fronts multiple productions which have also gained wide popularity back to BACK TO BLACK, a recreation of the entire Amy Winehouse album with an orchestra of 15, and Joe Cocker’s Mad Dogs and Englishmen in a 20-piece arrangement, have helped Remember Jones develop a diverse audience as the band opens each performance with a set of original music. They were the first to present R. Kelly’s Trapped In the Closet live with a 20-piece orchestra, and have performed Jeff Buckley’s Grace album in its entirety as a collaboration with Grammy-nominated guitarist and Grace co-writer Gary Lucas. In the spring of 2018, Remember Jones
produced a successful run of shows celebrating the 10th anniversary of Kanye West’s 808s and Heartbreak with a 25-piece orchestra band.

In the vein of reviving others’ material, a current Remember Jones studio project, ‘A Kick In the Head!’ celebrates the 100th birthday of Dean Martin, produced by Richard Barone and featuring a duet with Dean’s daughter, Deana Martin.

Whether you see him fronting a piano, a four-piece band, or with a soul orchestra of 25, Remember Jones evokes the energy of the great front men and women, with one of a kind song styling and expert storytelling that keep audiences on their toes and emotions in the moment.