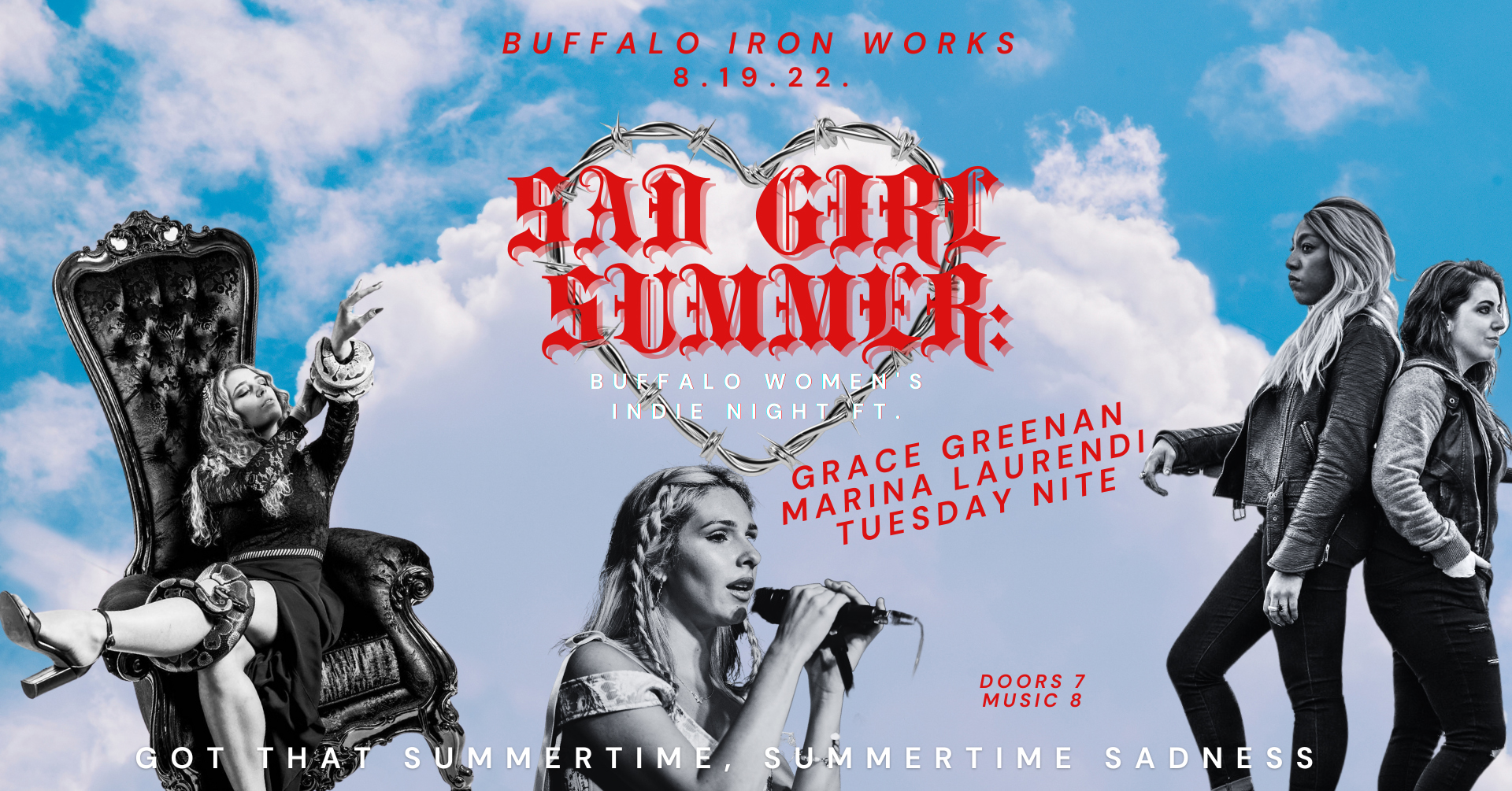 Sad Girl Summer packs the power of three dynamic indie singer/songwriter acts under one roof, for one night only. Each of these artists are forces in their own right, taking the Buffalo scene by storm with their unique and undeniably sweet sounds. This event is not only a celebration of women in music, but it is also a celebration of women empowerment. Live painting by female artists and vendors from local women-owned businesses will be set up throughout the evening. Come out and support your local girls.

Unafraid to dive into any genre, Buffalo, NY Singer/Songwriter Grace Greenan celebrates the art of escapism. Indie Pop, Alternative Rock, Hip-Hop, R&B and EDM are just a few genres to describe the avant-garde nature of her music. Attending a small Catholic school in Buffalo, New York her whole childhood, Grace Greenan developed her understanding of songwriting from liturgical and sacred music. Eager to break free from that shell, her love for the grit of Alternative Rock artist like City and Color and The Fray, drive the heartbeat and soul of her music. Fascination with the power of pop artists like Demi Lovato and the heart breaking ballads of Adele drove the honest but yet ambiguous characters in her projects; which soon developed Hip-Hop and R&B nuances from Kendrick Lamar and Mac Miller. Simply put the foundation of her stories have deep emotional depth and meaning, inspired from a vast variety of genres.

Artist and singer/songwriter, Marina Laurendi  fuses elements of cinematic pop, alternative rock, and singer-songwriter lyricism to create her unique sound. Poetic and moody with catchy melodies and haunting vocals, her music is steeped in personal experience yet universally relatable. A WNY native, Marina grew up as a theatre performer and moved to NYC shortly after college to perform Off-Broadway and around the East Coast. Her music is heavily influenced by the pulse of the city along with the quiet nostalgia of her roots. Her music shares a street with that of Lana del Rey, Phoebe Bridgers, and Taylor Swift. Marina has performed at notable venues such as The Bitter End in NYC, The Hard Rock Cafe in Niagara Falls, Nietzsche’s and Mr. Goodbar in Buffalo, and The Orleans County Fairgrounds (Tedfest V). Her music has been featured on radio stations such as Thunder 102 in Sullivan County, NYS Music, Broadway World, All Music Magazine, and has earned her spots on dozens of independent Spotify playlists. She recently announced her Stay Mine Tour 2022 to promote her debut EP coming this August. Her music is available on all major streaming platforms.

tuesday nite is a harmony-driven ambient indie rock band from Buffalo, NY featuring singer/songwriters Sara Elizabeth and Courtney Ann. With a friendship fostered through virtual open mics and songwriting meetups during the pandemic, Courtney and Sara discovered their mutual love for tight harmonies and current indie artists such as Pinegrove and Phoebe Bridgers, while digging into their classical roots and mac and cheese habits. from there, tuesday nite was born. The duo release their EP on 5/21. Follow @tuesdaynitemusic on Instagram and Facebook for more.