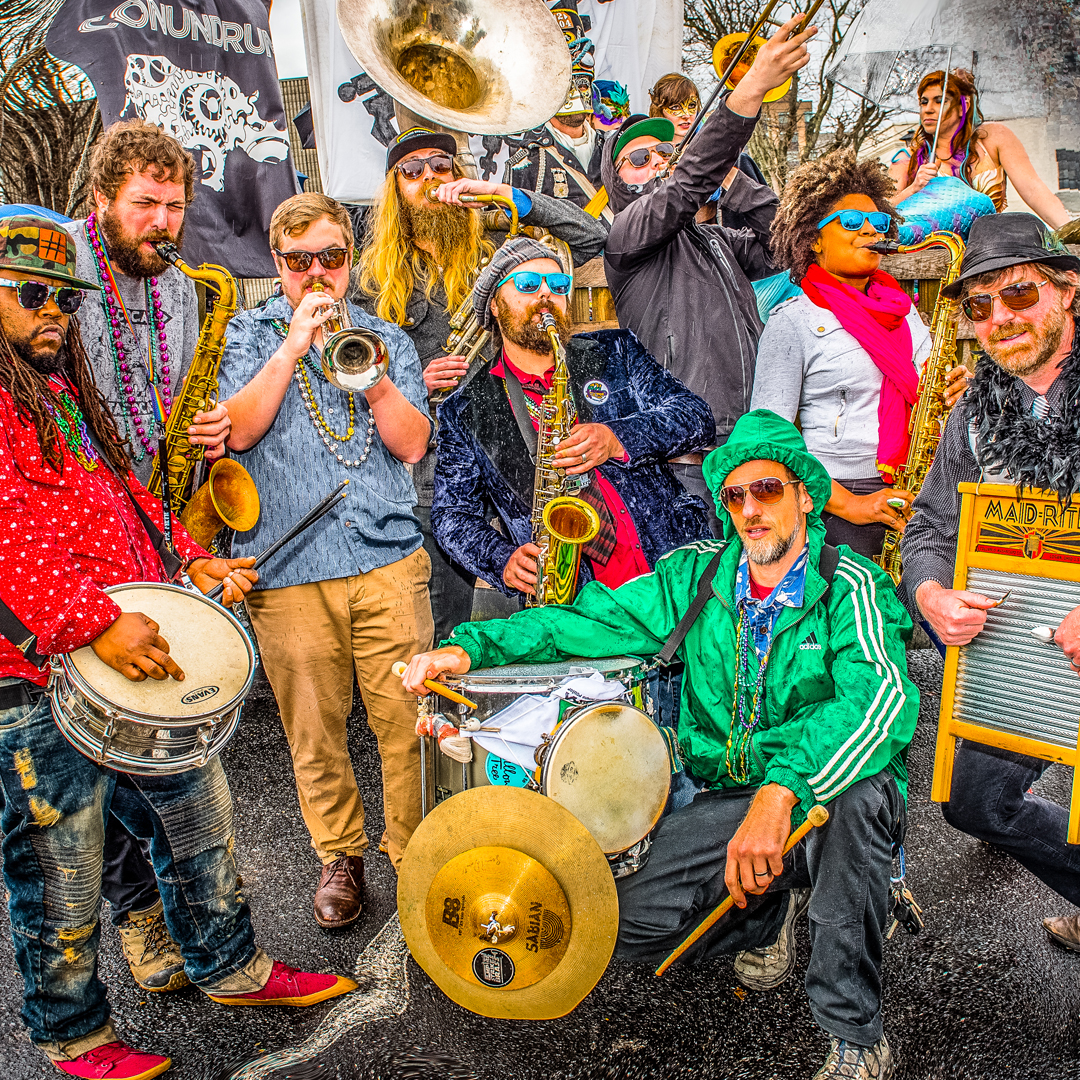 Empire Strikes Brass (ESB) is a high energy Brass-Funk-Rock band hailing from the city of Asheville, North Carolina. Formed on the streets of their hometown, ESB is rooted in the New Orleans Brass Band tradition of second-line parades and deep moving grooves reminiscent of old school funk. Combining complex musical arrangements with thoughtful lyrical song structure, ESB can stretch out and dig deep when they are feeling it or keep things tight and concise. The fat sound of the horns paired with one dirty rhythm section makes the music downright psychedelically nasty! Founded in 2012, ESB intentionally stretches the boundaries of the stereotypical brass band paradigm, fusing sounds from various genres and weaving them together with the common thread of Brass. The diversity of the music within their sets keep audiences guessing what is next to come.

Featuring rich group and strong lead vocals including Grammy Award winner Debrissa McKinney (Secret Agent 23 Skidoo), ESB not only takes its audiences on a ride to the dark side and back instrumentally, they also use the force of soaring melody and lush harmony to transport the listeners to another dimension. The band released its debut album, “Theme For A Celebration” in 2017 and it was tapped as one of the top 100 album releases in 2017 by WNCW 88.7 radio. Since their conception, ESB has been a consistent fixture at various festivals throughout the east coast. They’ve had the pleasure of having Warren Haynes (Allman Bros. Band and Gov’t Mule) sit in with them at New Mountain Amphitheater in Asheville, NC and the honor of headlining four years in a row celebrating the life of Dizzy Gillespie in his hometown of Cheraw, SC, for the South Carolina Jazz and Heritage Festival. ESB has co-billed with such artists as Dr. John & Lettuce. The horns have sat in on performances with Galactic, The Big Something, and many others. ESB horn players JP Furnas, Paul Juhl and Alex Bradley are also featured on the live album compilation from world-renowned artists Beats Antique entitled “Creature Carnival” released in 2015. The band is known to regularly parade off stage into the audience leading a the crowd in a raucous procession around the venue before, during or after their set.

Members of the band have also been expanding their musical resumes and repertoire. Notable side projects and performances include keyboardist Lenny Pettinelli’s recording and performing with Jazz is Phish featuring such artists as Jeff Coffin (Bela Fleck, Dave Matthews Band), Chris Bullock (Snarky Puppy), Michael Ray (Sun Ra, Kool and the Gang), the Chase Brothers and many more. The band’s founder, saxophonist Paul Juhl, performed with John Oates (Hall and Oates) at MerleFest. In addition to her work with Skidoo, Debrissa McKinney has performed with artists such as Karl Denson and George Clinton. ESB horn players Kyle Snuffer and Alex Bradley have recorded on Marcus King’s upcoming 2018 release produced by Eric Krasno of Soulive and Lettuce.