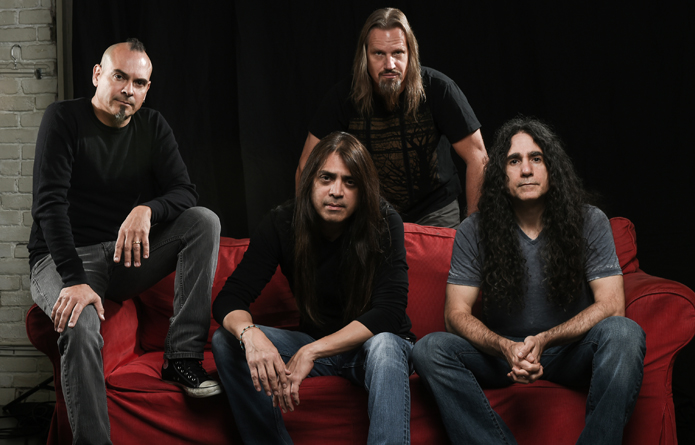 Right from the impressive first minutes of their new album, Fates Warning proves itself to be one of those rare veteran bands capable of delivering new material as poignant and powerful as their many high points of the past. One listen to the textures, momentum, attack and emotion in “From The Rooftops,” and it’s apparent that the band who defined progressive metal with albums such as AwakenThe Guardian, PerfectSymmetry, Parallels and A Pleasant Shade Of Gray has plenty of new paths to travel…

Performed by the core lineup that returned to form with 2013’s Darkness In A Different Light (guitarist Jim Matheos, vocalist Ray Alder, bassist Joey Vera, and drummer Bobby Jarzombek), Fates Warning’s twelfth album, Theories Of Flight, is a new facet of the band’s signature mix of melodic finesse, high-level performance and brooding melancholy. It even pushes the goalposts of the previous album out a bit further in each direction. Subdued parts are that much more lush, while other moments strike with ferocity not heard on a Fates album in quite some time. With the aforementioned core four providing most of the performances, occasional Fates member Frank Aresti performs guitar solos on “From The Rooftops” and “White Flag,” while current touring member Michael Abdow also has a guitar solo spot on the latter tune. With hooky, melodic burners such as “Seven Stars” and “SOS” leading to the more involved “The Light And Shade Of Things,” and even more light and shade beyond that, until the dramatic title track concludes the journey, Theories Of Flight’s 53 minutes is definitive Fates Warning.

While Darkness… was the first album release since 2004’s FWX, its own follow-up took considerably less time to emerge. “I started writing in January 2015,” says guitarist and main composer Jim Matheos. “About a year after Darkness, I started gathering ideas and getting serious about it.” As for the direction Theories Of Flight, which was produced by Jim Matheos and mixed/mastered by Jens Bogren at Fascination Street Studios (Opeth, Symphony X, Haken, etc.), eventually took, Jim let his muse lead the way. “I don’t usually look at it as ‘what do I want to do?,’ I’m usually just consumed by terror that I won’t come up with anything. Whatever comes up, I’m just happy that something comes up, and I let that take me in the direction that it’s going in. I don’t sit down and have a specific idea of where I want to go. The beginning is always the hardest part. Once you have the first couple songs down, then a direction starts to present itself and you take it more in that direction.”

Apparently it all came rushing out in a flood, evidenced by the myriad of highlights throughout Theories Of Flight. The calmer middle breakdown of “SOS” introduces a ghostly drone that changes a mysterious mood to pure dread; drummer Bobby Jarzombek’s nearly inhuman dexterity in parts of “From The Rooftops” is something to behold; the samples and soundscapes within “The Ghosts Of Home” sets an almost theatrical tone for what might be the album’s emotional climax, all 10-and-a-half minutes of it. The album’s galvanizing, exciting, go-back-and-listen-again moments are too numerous to mention.

As main lyricist, vocalist Ray Alder had plenty of musical emotion to work with. Themes of upcoming change — deliberate choices to take a different direction in life – are a large part of the album’s overarching themes of transience, disconnection and the search for solid ground. Alder’s writing and passionate singing in “Like Stars Our Eyes Have Seen” is beautifully reflective, urging us to trust our memories, to hold onto them even as we forge into future unknowns: “See the dark road that’s ahead / Lit by memories you knew / Now the ghosts begin to follow / Let it all come back to you.”

Matheos’s sole lyric credit is an especially personal one. “‘The Ghosts Of Home’ is me reflecting on how moving frequently as a child — eight times in the first nine years of school — affected and shaped my personality, something I’ve only recently been digging in to. It also references me revisiting a lot of those places as an adult. Similarly, a lot of Ray’s lyrics touch on a big move or change coming for him, although by choice. So, we’re both talking about various uprootings, escapes…flights.

”These themes are also reflected in the cover artwork by Michigan-based artist Graceann Warn. “The working title for the album was ‘The Ghosts of Home,’ and the song with that name was first called ‘Home Again.’ When I started searching for artwork I came across the piece that’s now the cover and it was called ‘Theories of Flight.’ In fact, the title you see on the cover is part of the original art, not something we added. I was immediately drawn to that phrase as being a better description of what some of the songs are about.”

INFINITE SPECTRUM – BIO
New York City-based progressive metal band Infinite Spectrum has garnered rave notices and struck a chord with prog rock fans the world over. Closing a three-year gap since their acclaimed 2013 debut album, Misguided, INFINITE SPECTRUM’s Sensory Records debut, Haunter Of The Dark is a full-length concept recording based on the short story by master of horror, H. P. Lovecraft, with the band bringing the famed short story to life through ambitious compositions featuring an abundance of dynamic, virtuosic playing, and powerful, melodic vocals. Re-teaming with Grammy award-winning engineer Chris Theis to capture their signature sound, with Haunter Of The Dark, INFINITE SPECTRUM has created a remarkable sonic journey for fans of prog both old and new. INFINITE SPECTRUM’s Haunter of the Dark has been heralded in online outlets from PROG to Metal Underground and print magazines such as Rock N Roll Industries (“…completely captivating.”) and Outburn (“9 out of 10”). INFINITE SPECTRUM has shared the stage with Haken, Thank You Scientist, Carl Palmer’s ELP Legacy, Brand X, The Fringe and many more. Combining theatrical elements with the progressive metal genre, the band has crafted their own brand of musical storytelling, which includes elements of radio-style drama for a uniquely cinematic listening experience. The music of INFINITE SPECTRUM is eclectic, innovative, and experimental in nature. Their current line-up features Will Severin (vocals), Alex Raykin (guitar), Alex Repetti (bass), Greg Schwab (drums), and Katie Pachnos (keys).