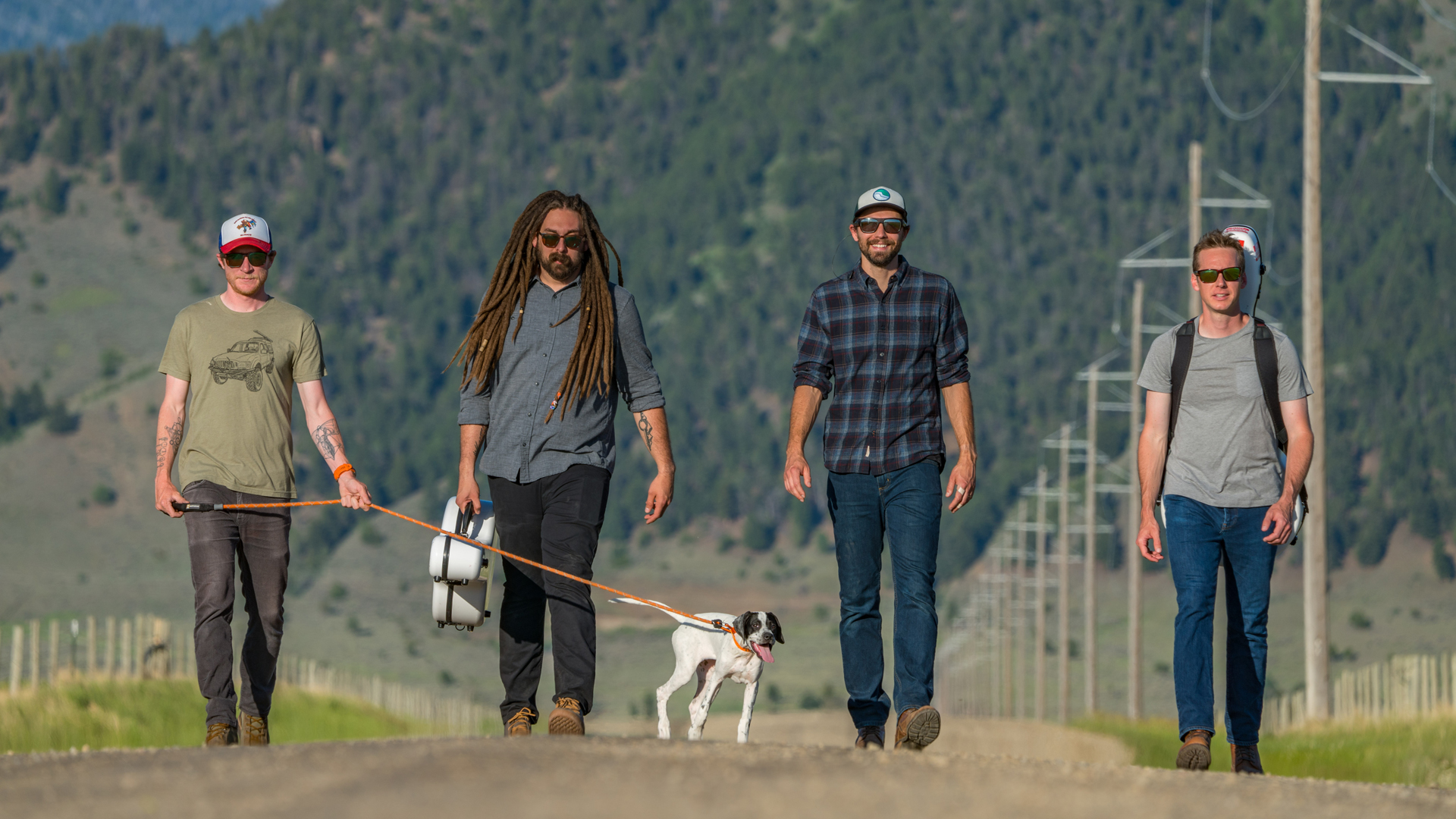 Among the many natural wonders in Montana, Wise River runs for about 30 miles through the Southwestern region of the state, cutting through the mountains and flowing into the Big Hole River. Beyond being a favorite spot for fly fishermen, it remains etched into the topography of the land itself.  Two hours away in Bozeman, Kitchen Dwellers equally embody the spirit and soul of their home with a sonic palette as expansive as Montana’s vistas.

“Since we weren’t on the road due to COVID-19, the music we wrote was different,” Max reveals. “It was more introspective. There were a lot of ties to Montana.”

“For the first time, we were all home for 365 days in a row, which hasn’t happened in ten years,” adds Shawn. “We were thinking of the quieter lifestyle encapsulated in the area. That comes through.”

“In the past, our songs would touch on the physical aspects of the state or reference its history and nature,” says Torrin.

“These songs are more introspective, because they come from the perspective of actually being in one place. The vibe is a little more serious—given the weirdness of the past year and the shit everyone has been dealing with. Our little corner of the world has always delt with hard winters, but the whole world felt it in 2020.”

At the same time, their music continues to resound beyond that little corner. They’ve captivated audiences at hallowed venues such as Red Rocks Amphitheatre and performed alongside everyone from Railroad Earth and Twiddle to The Infamous String Dusters in addition to playing festivals such as Northwest String Summit, WinterWonderGrass, and more. They’ve released two critically acclaimed albums—Ghost In The Bottle [2017] and Muir Maid [2019]—and a live record, Live from the Wilma [2021]. They broke up 2020 with an EP of Pink Floyd covers entitled Reheated, Vol. 2. It was heralded by a two-night livestream concert, Live From The Cabin, beamed out to audiences from the Bridger Mountains. Additionally, they appeared at the Live From Out There virtual festival and even took over a drive-in movie theater for an in-person gig in between regular writing sessions together throughout the year.

In order to bring the new tunes to life, they recruited Cory behind the board as producer. Holing up at Creation Studios in Minneapolis, they recorded Wise River in just four days.

“Cory brought a little more orchestration,” Shawn reveals. “He helped us really think differently and evolve the sound as a band.”

On the single and title track “Wise River,” banjo brushes up against acoustic guitar as visuals of a “lonely river town where the barfly knows you best,” “the ghosts of miners,” and a place “where the snow can fall like cannonballs and lonesome wind blows bitter.”

“The town of Wise River is basically a forgotten spot on the map,” Shawn says. “It used to be a thriving place with many prosperous mines, but now it’s practically dried up. There’s a hell of a lot of melancholy. In our mind, it symbolizes the overall feeling of being in slowed-down Montana life.”

Meanwhile, “Stand At Ease” gallops along on nimbly strummed banjo and bright piano towards a chanting chorus, “I can’t stand to see what you’ve done to be free.”

“That one is based on the mental health issues in the music industry coming to light over the past couple of years,” Joe reveals. “It’s about losing a lot of our friends and idols.”

“Paradise Valley” surveys the landscape as the lyrics visit the remnants of underground bunkers once occupied by a doomsday cult in the north. The finale “Their Names Are The Trees” recants another true story of tragedy in the wilderness.

“A good friend of ours is a wildland firefighter,” Shawn goes on. “He was stationed out in Oregon on the Beachie Creek Fire, which destroyed maybe three towns and killed several people. One night, they were 15 miles back from the fire line. They wondered where the fire had moved in the wind, but it overtook their camp, the entire town they were stationed in, and wiped it out. Several people didn’t make it.”

In the end, Kitchen Dwellers share timeless American stories from the heart of one of its greatest treasures.

“When you listen to Wise River, I hope you hear some of the original qualities that made us who we are, but you also recognize aspects that are new and adventurous,” Max leaves off. “If you go to a studio with a whole new batch of songs, it should never be the same as the last time. I hope you hear what it sounds like when the four of us are at home and have the space to create something together. This album is really how we sound as a band.”