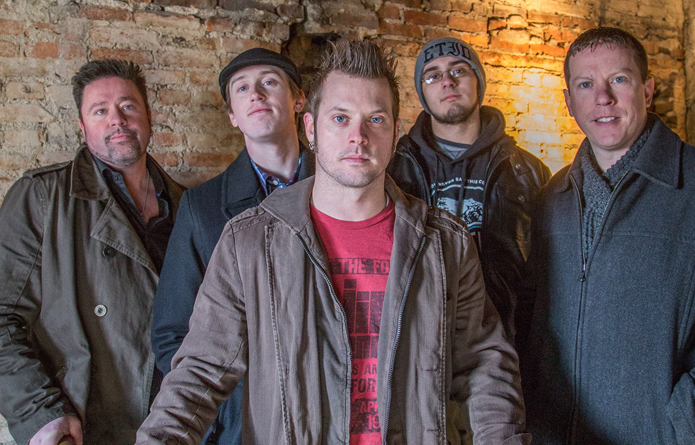 Though known for its vibrant music scene, Ithaca NY is a relative fishbowl musically, often keeping its boundless talents within city limits for nobody outside the local scene’s elite to hear.

Meet the fish that jumped out of the water.

The New York Rock has been one of the city’s shining stars since its founding in February 2008 by Mike Brindisi (Guitars/Vocals) and John O’Leary (Keyboards). Began as a dream of Brindisi on the streets of Manhattan, the dream behind the New York Rock started with handfuls of change in the bottom of a guitar case following a brief stint on Saturday Night Live and a rough runaround in Nashville, when a trip down south after high school ended with “a broken heart, empty pockets and another tough lesson learned.”

Though superficially a fruitless expedition, the trip yielded a demo that eventually became the foundations of the band. Inspired by the city’s local scene, Brindisi moved to Ithaca, NY, where his first single, “Crawl,” jumped to number 22 on the most-requested chart of local station WVBR. Attracted by its low-key atmosphere and exceptional music scene, it was an excellent place to begin a career, and where he would eventually meet fellow founder John O’Leary.

Within the band’s first year, they had already opened for national touring act Gavin Degraw and off that first bit of momentum, saw the video for the band’s first single make it onto the playlist of Cool TV.

In the time since, The New York Rock has begun to see their profile grow nationwide, from gigs at the notable Driven Music Conference in Atlanta to one-off gigs in places such as Nashville, Austin, Cleveland, Pittsburgh and a primetime gig at the legendary Bitter End rock club in Greenwich Village, NYC—a night the club was packed to capacity.

The band has also appeared on the 2014 Vans Warped Tour, making a single-show appearance in Hartford, CT and in the documentary Passfire, for which they wrote the theme song subsequently performed at the PGI fireworks convention in Iowa, an international event for members of the pyrotechnics industry.

Whether its for a stage of four fans like the early days or the 4,000 the band has played for at venues like Saranac Brewery, the band refuses to sell out, instead looking for a means to hone their craft to the point where nobody can deny their style as a powerful voice in today’s industry.

“We have always stuck to our guns,” Brindisi said. “We have always played rock. That’s it. Good melodies, loud guitars and great hooks. We have never wavered… we want to keep rock alive.”

The sound of PA Line proves that in the current musical world of repetition and catchy leads, music can still hit you in the heart. By combining dedication and raw talent, Trever Stribing (lead vocal/guitar/percussion) ,Lucas Honig (vocal/Bass) , and Alyssa Wainwright (violin/vocals) have made a unique brand of alternative folk music influenced by artists ranging from Mumford and sons to Sly & the Family Stone.

Their high energy creations have received recognition around the country in New York, Ohio, California, and Florida, just to name a few. As well as a tour in the UK, with a summer 2017 return tour.

They currently have 2 albums out, “Liar” and “Breathe” ,and are in the works to start recording for a third. Having been playing music together for almost a decade, Their parallel drive and catchy rhythms are something you’ll never forget.