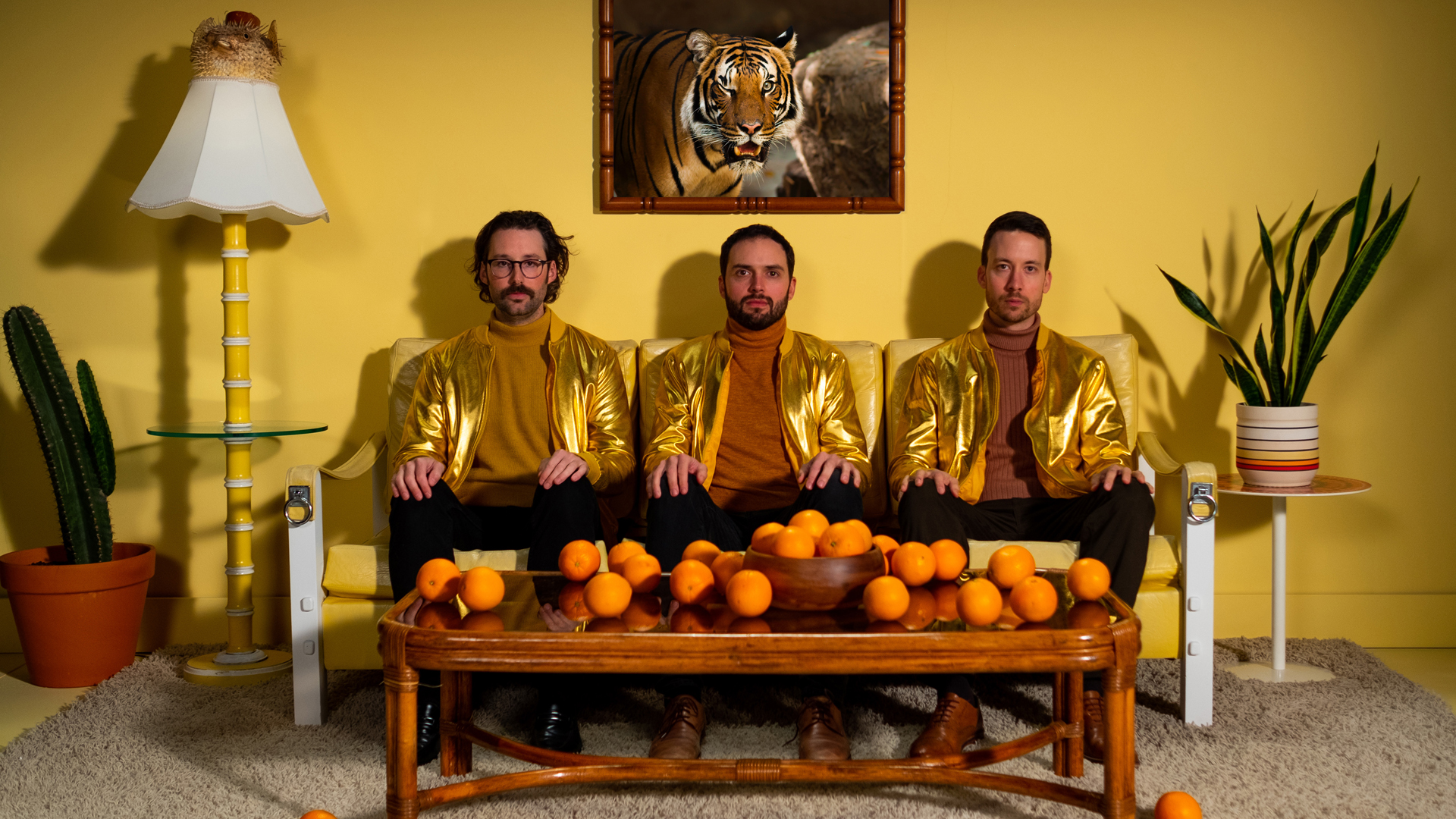 Sometimes you don’t know what you’ve got ‘til it’s gone. Jimkata learned that lesson firsthand back in 2017, when the hard-touring Ithaca electro-rock trio announced that they were going on an indefinite hiatus.

“We were starting to get burned out after all that time on the road,” says guitarist/singer Evan Friedell, “so we decided we’d play some final shows and go our separate ways. In the process of doing that, though, we discovered the value our band had brought to so many people’s lives. We kept hearing stories about the difficult times our music had gotten people through, and that outpouring really helped us understand that what we were doing was bigger than we’d ever realized.”

Now, four years later, Jimkata is back, this time with a renewed sense of purpose and an extraordinary new album to show for it. Recorded in Syracuse with producer Jason Randall, Bonfires finds the trio digging deep and stretching their sonic boundaries with bold, intoxicating arrangements fueled by swirling synthesizers and anthemic hooks. The songs here are at once modern and classic, blurring the lines between the organic and the electronic as they reckon with doubt, struggle, and perseverance in a search for truth and meaning. Like much of Jimkata’s catalog, Bonfires delivers transcendence in tight, dancefloor-ready packages, but there’s a sense of freedom at play on the collection that pushes the trio’s performances to new emotional heights, a kind of liberation that can only come from learning to let go of expectation and embrace the moment.

“Early on, we decided that if we were going to bring the band back, we weren’t going to let ourselves get caught up in any of the superficialities of the music industry,” says Friedell. “We’ve always enjoyed each other’s company, and we’ve always enjoyed making music together, so why worry about anything else?”

Indeed, the heart and soul of Jimkata has always been the enduring friendship between Friedell and his longtime bandmates, guitarist/keyboardist Aaron Gorsch and drummer Packy Lunn. Pals since middle school, the three officially launched Jimkata in 2005 while attending Ithaca College, where they discovered that their broad range of musical tastes—everything from 80s pop and indie rock to 90s grunge and hip-hop—could be synthesized into something wholly unique. Though they didn’t take themselves too seriously in the early days—the band’s name was an irreverent reference to the 1985 so-bad-it’s-good gym-fu caper Gymkata—the group quickly found an audience for their buoyant, relentlessly feel-good performances, which grew from local house parties to club, theater, and festival dates around the country on the strength of a series of critically acclaimed studio albums. Popdose hailed the band’s “bubbly sweetness,” while American Songwriter praised their “organic chemistry,” and Relix raved that the trio’s sound “proves that rock-based music still has a place in the world of four-on-the-floor beats.” But after five records and countless nights on the road, the band found themselves at a crossroads in 2017, staring down the future with more questions than answers on their hands.

“We just reached a point where we felt unsure of how to continue,” says Friedell. “It seemed like the right time to step away and do a little soul searching.”

It was only in that process of stepping away that Jimkata learned just how much their music had meant to the fans. The revelation was one that would stay with Friedell over the next several years, most of which he spent living in LA and exploring a broad range of creative endeavors, from enrolling in formal voice lessons and performing in other people’s bands to writing new music that pushed him out of his comfort zone.

“Having some distance released me from thinking about who would be playing or listening to the songs I was writing,” Friedell explains. “For the first time in a while, I felt free to just chase pure inspiration and let it lead me where it may.”

Friedell’s bandmates all grew during their years on hiatus, as well, both personally and professionally. Gorsch, who remained in upstate New York, became a father for the first time, while Lunn, who joined Friedell in Los Angeles, continued to hone his already prodigious electronic production skills.

“I think the time away brought us all more maturity, more patience, an ability to see the bigger picture,” explains Friedell. “We all gained a lot of perspective on life and the value of being in a band together.”

And so the trio began meeting up once again at Gorsch’s home in the Finger Lakes, listening to demos Friedell and Lunn had worked on in Los Angeles and imagining how they could grow into Jimkata songs. Unlike the band’s previous albums, which were often written and recorded quickly during short breaks from the road, Bonfires evolved slowly and deliberately, with no timetable or deadlines driving it.

“These are probably the most produced and considered songs we’ve ever put out,” says Friedell. “In the past, we’d go into the studio with some rough ideas and work a lot of things out on the fly, but this time around, we worked very intentionally and knew exactly what we wanted before we ever played a note.”

Such meticulous pre-production allowed the band to record live in the studio and feed off the joy and chemistry of playing together again. Take a listen to the effervescent title track, which kicks Bonfires off, and it’s easy to feel the energy absolutely radiating out of the speakers. The reggae-inspired “Roots Down” shimmies and shines as it revels in the power of true love, while the ecstatic “Skinny Dipping” hints at Graceland-era Paul Simon as it dives headfirst into the unknown, and the hypnotic “Liar With The Lights On” flirts with R&B and disco as it ponders our social media-fueled fake-it-til-you-make-it culture.

“‘Liar With The Lights On’ is bouncy and dancey and fun,” says Friedell, “but beneath the surface there’s something a little darker going on. We live in a world of influencers putting on a show, and I often wonder how they feel when they go to bed at night, if they ever think about finding their real truth at the end of the day.”

Such playful music and weighty lyrics are a frequent pairing on Bonfires. The driving “Weight of Paradise,” for instance, grapples with addiction and desire; the slow-burning “Hard Headed” tries to make sense of the inexplicable; the trippy, pulsating “Wanna Go” searches for escape; and the portentous “Writing On The Wall” reckons with an impending sense of doom.

“All of these tracks were written and recorded before the pandemic,” Friedell explains, “but they’ve taken on new meaning in light of everything that’s unfolded since then. These songs are about finding a way forward, about surviving hard times and learning to appreciate the present, and I can’t think of a more appropriate time to be releasing them.”

These days, Jimkata knows exactly what they’ve got, and they’re grateful for every second of it.